This past week, a tuxedo-clad Brian Banks walked on a red carpet, along with his amazingly supportive mother, to receive an honor he could not have imagined when he was sitting in prison for 5 years, wrongfully convicted of rape.   When it was his turn to speak, a room full of some of the best current and past college and pro football players gave him a standing ovation.  Then, they listened to Brian give an inspirational speech, committing to a life helping others who have been wrongfully convicted as he held the Lott IMPACT Trophy ®. , an honor given to defensive football players with both incredible personal character as well as athletic performance. 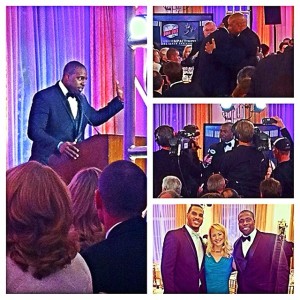 Before he was falsely accused of rape, Brian was one of the most highly recruited high school football players in the country.  Before his senior year, he had already committed to play for Pete Carroll at USC, a path most likely to lead directly to the NFL.  Instead, the false accusation led to five years in prison and five on parole as a convicted sex offender.

After his exoneration, Brian fought to get back his dream of playing in the NFL.  I personally watched him work out day after day, determined to prove himself worthy to each team that gave him a tryout, making the most of every chance he had to get back to the game he loved.  That dream was fulfilled this past Fall as he played throughout the preseason for the Atlanta Falcons.

The trophy Brian received this past week was named in honor of Ronnie Lott, a two time All-American USC football player and College Football Hall of Fame inductee.  Ronnie won four Super Bowl rings with the San Francisco 49ers, took ten trips to the Pro Bowl, and earned a spot in the Pro Football Hall of Fame.  He was known for his character both on and off the field.

Who knows what path Brian’s life would have taken had he not been wrongfully convicted.  He might hold NFL records and titles like Ronnie, instead of holding the trophy named after him.  Regardless, the past is the past and Brian’s future is bright.  He is on a path with a higher calling beyond individual glory.  He has already helped in two exonerations beyond his own and he will continue to help others whose lives have been taken away by our justice system.