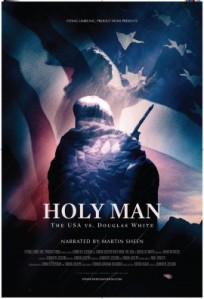 A couple of impressionable young children pressured into alleging molestation and pointing the finger because of a family feud and manipulative games between “grown-ups” that they don’t understand.  Procedural errors in the investigation and conviction, which are ignored by the appellate courts.  Later, after the children have grown up, they recant, and pass polygraphs.  They show remorse and frustration, and convincingly explain why they were made to lie when they were children.  Evidence about the family feud that led to the false charges is plentiful.  Jurors sign affidavits saying they would not have convicted had this been known.  Prosecutors and courts don’t care.  Innocent man languishes in prison (in this case, until death).

Sound familiar?  To anyone who has worked with an Innocence Project, it certainly would.  Like with our own cases involving this all-to-common fact pattern, this is what happened to Lakota medicine man Douglas White.  A new documentary, Holy Man:  The USA v. Douglas White (trailer here) tells of this heartbreaking phenomenon in the context of Native American spirituality and reservation life.  The filmmakers’ shock at how the prosecutors and courts refused to listen to reason, and bent over backwards to avoid considering the new evidence, will strike close to home.  Details here.