Immigration Policies Should Not be Driven By Prison Profiteering

Corrections Corporations America, the GEO Group, and Management and Training Corporation house 80% of those apprehended for immigration crimes.  Between them, they make a profit of over $5 billion per year. CCA Founder is quoted as saying selling the concept of private prisons to the government is just “like you were selling cars, or real estate, or hamburgers.”

Prisons should not be run just like any other business.  The social costs are too great to simply consider the supply and demand of inmates, and increasing supply by legislating new crimes or changing enforcement.  Clearly, these companies rely and directly stand to benefit from anti-immigration laws. The Associated Press noted that they spent $45 million on lobbying over the last decade. Since 2005, the largest growth in prison populations came from federal immigration detentions. It has been the leading cause of incarceration for the last four years.   It is the growth sector for these businesses.

Immigration reform is at the forefront of our national and foreign policy.  Decisions need to be made that make sense domestically and for our relationships with our southern neighbors.  Those decisions should also be driven by what is right, fair, and humane.  They should not be driven by the profiteering of the corrections industry. 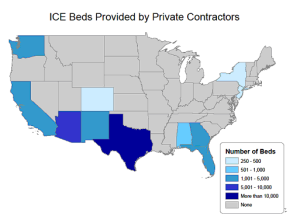 This image is from:
<http://www.detentionwatchnetwork.org/privateprisons&gt;

This entry was posted in Inquisitional and adversarial systems of justice, Latin America, Reforming/Improving the system. Bookmark the permalink.