Sarah Pearce Freed in Idaho after nearly 12 years in prison 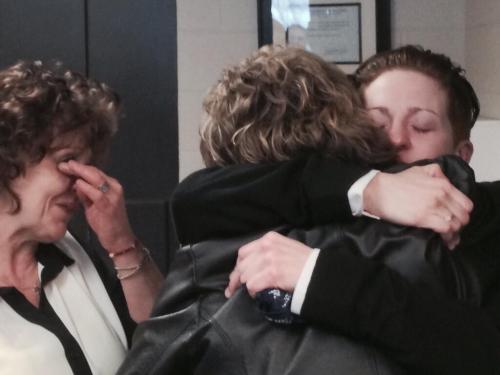 Sarah Pearce hugs her aunt as she leaves the Canyon County, Idaho Jail. Her mother and champion Anita Brown looks on.

After over twelve years of incarceration, Sarah Pearce’s quest for freedom ended today when she was granted post-conviction relief in the District Court of Idaho’s Third Judicial District. Sarah (31) was convicted of six felonies in 2003, including aiding and abetting the 2000 attempted murder of Linda LeBrane. She was sentenced to a fifteen year determinate period of incarceration with an indeterminate life sentence. Sarah has always steadfastly maintained her innocence.

After over five years of litigation, post-conviction relief was granted in the form of Sarah being resentenced to time served. Sarah said she looks forward to spending time with her family, jogging, attending school, and volunteering for the IIP.  At the hearing Pearce said “This is a tragic misidentification … I did not commit this crime, but all the same I was punished for it. The experience goes almost too deep for words. I will try to walk away from this taking more from it than it has taken from me.”

The Idaho Innocence Project (IIP) and her attorneys have been working to free Sarah since 2007. A petition for post-conviction relief was filed in 2008 after IIP staff and volunteers obtained affidavits from several trial witnesses suggesting that another suspect, not Sarah, was LeBrane’s female attacker. Sarah’s petition was later amended to claim that her constitutional rights were violated when it was discovered that Canyon County law enforcement officers withheld a rescored polygraph examination of the very same female suspect.

The IIP has had its funding drastically cut after it was not awarded a competitive Department of Justice grant this year but continues to offer DNA support to attorneys litigating cases of actual and demonstrable innocence.  Donations to the Idaho Innocence Project can be made online: http://innocenceproject.boisestate.edu