The Exonerated Sound Wakeup Call on Abuse of Solitary Confinement

Clarence Elkins spent six and a half years in prison for a crime he didn’t commit, but the worst of it was the last three months leading up to the day he was exonerated and released. Because the true perpetrator of the crime that had stolen Elkins’s freedom was in the same prison, Elkins was placed in solitary confinement for his own protection. Solitary is sometimes used as a means of separating inmates. Even though Elkins had done nothing to deserve it, he was treated like any other person in solitary. It was a nightmare. Last week Elkins and five other exonerees reported their solitary confinement experiences in a written report to the Senate Judiciary Subcommittee on the Constitution, Civil Rights, and Human Rights.

I feel certain that the short but powerful report, here, would appall the vast majority of Americans.

Samplings from the report: “No blanket, no underwear, or pillow…no bed mat. END_OF_DOCUMENT_TOKEN_TO_BE_REPLACED 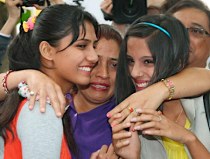 Mainali’s wife and his two daughters.

It points out some of the problematic features of the Japanese system including: (1) prosecutors withholding evidence which would have cleared the defendant (no Brady rule in Japan), (2) not enough disclosure of the prosecution’s evidence, (3) no law to limit the appeal by the prosecution to a not guilty decision by the court, etc. In addition, there were apparently even more hardships for Mainali, who is a Nepalese.

Mainali is expected to leave Japan for his home country this week.

Facing retrial, exoneration and freedom after spending 15 years in prison for the 1997 murder of a Tokyo woman — a crime for which he was initially acquitted — Govinda Prasad Mainali could be a case study in the flaws in the nation’s judicial system.

Like other foreigners in violation of their visa status, the Nepalese was placed in immigration detention after his acquittal, pending deportation. But prosecutors had other plans: They made sure he stayed in immigration custody as they retried his case on appeal, bent on a conviction.

To this end, they withheld evidence that would strongly establish reasonable doubt of guilt. In short, they presented, as a spokesman for the state said, what was needed “to prove their case.”