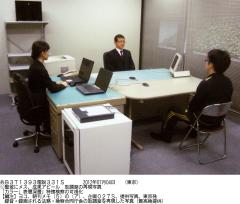 Demonstration of how the recording would take place during interrogation by prosecutor.

As I posted earlier, the SPPO started recording some interrogations on an experimental basis in 2006. Last week’s report  focused on the experimental recording in three Special Investigation Units and ten Special Crime Devision Public Prosecutor’s Office, which took place in 91 cases from March 2011 through April 2012 (note that these offices or branches in the Public Prosecutor’s Office usually involve only white collar crimes). The report revealed what the prosecutors in Japan have to say about the recording of interrogations.

Below are the points worth noting:

1)  Interrogations in 91 cases out of 98 were either partially or entirely recorded. The entire interrogation process was recorded in 39 cases.  30 of the cases concerned tax violations.

3) Recording took place in other prosecutor’s offices in 946 cases out of 1,005 cases, where the charge was a serious offense and the case was to be disposed of by a Lay Judge trial, such as murder. In cases involving persons with intellectual disabilities, 540 cases were recorded (this was all of the cases in this category except where the accused refused). END_OF_DOCUMENT_TOKEN_TO_BE_REPLACED