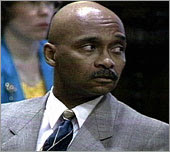 Douglas Prade, a former police captain from Akron, Ohio, was convicted of killing his ex-wife in 1998 based primarily on “bite mark” evidence (i.e., an expert testified at trial that the bite mark impression left on his ex-wife’s skin matched Douglas’ teeth).  Doug’s ex-wife, Margo Prade, was a prominent doctor in Akron at the time she was murdered in her van in the parking lot of her office.  The case received significant national media attention at the time of trial, including from Dateline NBC and other  national programs.

The OIP and Jones Day announced today that DNA testing of the bite mark area of the lab coat found male DNA, and Captain Prade was excluded as the source of that DNA.   Prade was also excluded from all other DNA found at the crime scene, including the male DNA found under the victim’s fingernails.  Despite the prosecution’s claims that the lab coat might have been contaminated, months of DNA testing on various parts of the lab coat, pursued by the prosecution, failed to show any male DNA profiles anywhere on the coat except in the bite mark area where the killer bit so hard that he left a deep, lasting impression.

Upon his conviction in 1998, Prade immediately stood, addressed the court, and stated: ”I didn’t do this…  I am an innocent convicted person. God, myself, Margo and the person who killed Margo all know I’m innocent.”  Prade also stated that he would accept the State’s apology when he was eventually proven innocent.

Prade first sought DNA testing in 2004, as soon as Ohio law recognized a statutory right for inmates to obtain DNA testing.  The Summit County Prosecutor’s Office (SCPO) declined Prade’s request for DNA testing.  Accordingly, the OIP filed suit on Prade’s behalf seeking a court order granting him the right to DNA testing.  Prade has sat in prison for 8 years while his suit for DNA testing has wound its way through the justice system, including two trips to the Court of Appeals and a trip to the Ohio Supreme Court in 2010.

After the Ohio Supreme Court remanded Prade’s DNA testing case to the trial court in 2010, Judge Judy Hunter of the Summit County Court of Common Pleas finally granted testing to Prade, over the objection of the SCPO.  Judge Hunter, who was hearing the Prade case for the first time as she had replaced the judge previously assigned to the case, found in her written decision that the lab coat was not contaminated or dirty, and that if a male DNA profile was found in the bite mark area of the lab coat that Margo was wearing at the time she was attacked, and if that DNA profile did not match Douglas Prade’s profile, then the results would be “outcome determinative” and sufficient for relief under Ohio law.

In February of 2012, the Fairfield, Ohio DNA Lab DNA Diagnostics Center (DDC) reported that it had identified male DNA in the bite mark area of the lab coat, in an area that had previously tested positive for the perpetrator’s saliva, and that Douglas Prade could be conclusively excluded as the source of that male DNA.  The Summit County Prosecutor’s Office then claimed that the lab coat was contaminated, and that DNA testing of different parts of the lab coat would show the DNA profiles of many different men.  This, the prosecutors suggested, might raise the specter that the male DNA in the bite mark might not have come from the perpetrator, but rather, from general contamination.  Subsequent DNA testing shot down these claims, however, finding no male DNA profile anywhere else on the lab coat outside of the bite mark.

Next, further testing excluded Prade from the male DNA underneath Margo Prade’s fingernails.  Prade then consented to the SCPO’s request to test numerous items of evidence in its attempt to find Prade’s DNA somewhere at the crime scene, but, even with highly advanced forms of DNA testing not available at the time of trial, the SCPO found Prade’s DNA nowhere.

Here is the press release:

The Ohio Innocence Project at the University of Cincinnati College of Law (OIP), along with co-counsel at Jones Day in Cleveland, announce that exonerative DNA test results have been obtained in the case of Ohio inmate Douglas Prade.  Prade is a former Akron Police Captain who was convicted in September 1998 of murdering his ex-wife, Margo Prade, a prominent physician in the Akron area.

Based on the DNA test results, Mr. Prade has filed a petition for post-conviction relief or for a new trial, which the State has opposed.  A hearing is scheduled for August 21, 2012, before Judge Judy Hunter in the Summit County, Ohio Court of Common Pleas.

At trial, an expert for the State testified that the killer bit Margo Prade during the struggle, leaving a bite mark impression on her skin.  Results of the recent DNA testing on Margo Prade’s lab coat over the site of the bite mark exclude Mr. Prade as the source of the male DNA that was found there.  This testing was done by the Fairfield, Ohio DNA Diagnostics Center (DDC).  DDC provided testing in this case free of charge as a public service.

The OIP has represented Mr. Prade since 2004, with staff attorney Carrie Wood currently handling the case.  The OIP was joined in 2008 by David Alden and Lisa Gates of the Cleveland office of the international law firm Jones Day, which has served as lead counsel since that time.  David Alden successfully argued Mr. Prade’s request for DNA testing in The Supreme Court of Ohio and, after remand, before Judge Hunter.  David Alden and James Young from Jones Day also assisted the OIP in obtaining the 2010 exoneration of Raymond Towler, who had been incarcerated since 1981 for a rape that DNA testing showed he did not commit.

Note:  Exoneree Clarence Elkins, who met Prade in jail and has been following the case closely, commented upon learning the news, “First it was me, then it was Dewey Jones, and now Prade, all convicted of murder I understand by the same assistant prosecutor.  They should re-examine all of his cases.”  I’m sure there are many who would agree.  Indeed, an independent task force should be created to re-investigate all cases prosecuted by the specific indivuals responsible for this potential “cancer cluster” wrongful convictions.